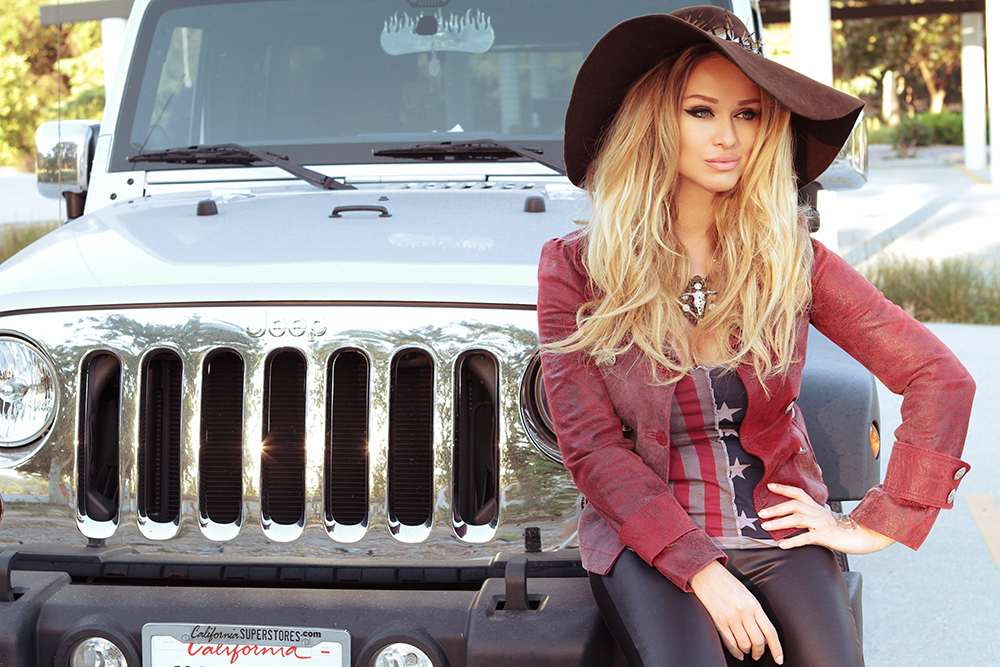 KatarinaVan Derham was born in the former Czechoslovakia (now Slovakia). When the 1980’s and MTV along with the opening of her country collided, she was exposed to a brand-new world and her fantasies became her drive. She left Slovakia at the age of 22 with $500.00 in her pocket and ambition as her guide. Her destination was Los Angeles.

As she reveals in her docu-series The 90’s Girl, Katarina’s beginnings were humble but filled with love. Growing up in a small-town of 1000 people has taught her to respect everyone and to be happy with having very little. Catching the acting bug early in the elementary school, she starred in “Cinderella” and her dream was born. In school her favorite subject was mid-evil history and in her free time she enjoyed visiting castles. Did you know that her country has over 1120 castles? It is the most in the world per populations. Perhaps Walt Disney should have spent time in the former Czechoslovakia for more inspiration. Who knows what fairy tales would have been written? With the rise of MTV in the 1980’s music and dance became her other passions.

As in many of these stories of new cultures arriving in the US, it is never easy. It wasn’t easy for Katarina either. She looked for her own culture here and quickly learned the realities of cruelty. She was naïve but was lucky a few people along the way of her journey took a chance on an unknown. For example, she worked in a restaurant and the manager was kind enough to let her sleep in the booth when she couldn’t afford transportation. She got her first apartment with no credit or history from an elderly couple who warmed to her spirit and wanted to help. It was during those times, she learned true humanity and how important it is to give back. She found herself in a few awful situations, but then again strangers came to her rescue. Katarina’s integrity was tested many times along the way but she decided to stay true to herself and have faith it would be ok in the long run.

Katarina was discovered by a photographer and his wife who saw potential in her as a model while working in a restaurant as a waitress. It was right out of the story books. They managed her career and introduced her to one of the top commercial agencies in Los Angeles at that time. In less than two months she landed her first national commercial for Coors Light Beer. Following the success of Coors Light Beer, she landed four more national commercials with AT&T,Dodge Ram, and returned for Coors Light Beer. In the same year Katarina was named The Fresh Face of 2004by Femme Fatal Magazine. It was during this time Katarina was given the opportunity to become a member of the Screen Actors Guild which opened the door to her appearances on television shows such as Monk and CSI.

Over the next decade she would go on to grace the covers of over 60 magazines worldwide, and appear in seventeen (17) national and international commercials. She was the face of ‘St. Pauli Girl’ beer for two consecutive years. She starred in several music videos and HBO’s hit show ‘Entourage’, alongside actor Bob Saget. Most recently she played the lead role in the award-winning movie Unbelievable!!!!!, featuring 42 Star Trek actors including Nichelle Nichols, Tim Russ and Garrett Wayne, as well as Snoop Dogg and Michael Madsen among others. (Check out Katarina’s resume on IMDb.)

Having the experience of being on both sides of the camera, in 2016 she created and produced a new doc-series called The 90s Girl, which chronicles her life from growing up in a communist country to the woman she is today. Each episode brings to light a different aspect of Katarina’s life.

Katarina’s experience in the entertainment industry led her to create the lifestyle magazine VIVA GLAM in 2012. As the CEO and creative director she oversees all aspects from original content, fashion campaigns and bringing her readers information to make conscious decisions about their lifestyles. Her passion for ethical living led her to launch a cruelty free beauty brand called Glamour Garden , which is inspired by her European heritage. Having been a vegan for 23 years, she is a strong advocate for a vegan lifestyle and hopes to positively impact the world on a grand scale.

Katarina resides in Los Angeles, California with her two cats Tinkerbell and Sparkle along with her Pitbull-mix Daisy.